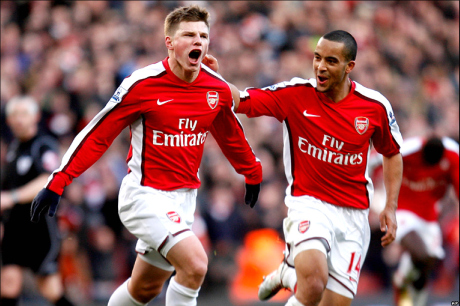 Arsenal climbed above Manchester United into second place in the Premier League with a 3-1 home win over Burnley on Saturday — but if Nicklas Bendtner had shown any sort of finishing ability they would have been top.

The Dane missed a hatful of increasingly easy chances as Arsenal sought the four-goal victory that would have taken them above Chelsea on goal difference.

As it was, goals by Cesc Fabregas, Theo Walcott and Andrey Arshavin took them to 61 points, the same as leaders Chelsea, who are in FA Cup action against Stoke City on Sunday.

Arsenal, who were 11 points off the pace in December and nine behind a month ago, could drop back to third later on Saturday when Manchester United, on 60, seek to go top with a win or draw at Wolverhampton Wanderers.

With Burnley managing just one draw and 13 defeats from their 14 previous Premier League away games this season, it was no surprise that Arsenal were on top from the start.

Burnley seemed content to sit deep and allow Arsenal to do all their neat passing in front of them.

The onus was on Walcott to find a way through and show himself worthy of a place in England’s World Cup squad but though the winger had some early success against his full back he failed to provide much in the way of convertible crosses.

Instead it was the eye-of-a-needle passing of Fabregas and Samir Nasri that eventually opened the massed Lancs ranks and enabled Fabregas to cleverly tuck in the opener after 34 minutes.

The mercurial Spanish midfielder limped off a few minutes later with what looked like a hamstring strain — not good for Arsenal ahead of Tuesday’s Champions League game against Porto.

Arsenal paid for their profligacy when David Nugent was given space to run through the middle and lift the ball over Manuel Almunia five minutes into the second half.

Walcott restored the lead 10 minutes later with a well-taken curler but while the fans sat back to await the goal rush that would take them top, the misses left them nervous before Arshavin finally killed it off in stoppage time.

With a kinder-looking run-in than either of their two rivals, Arsenal remain very much in the hunt for their first title success since 2004.