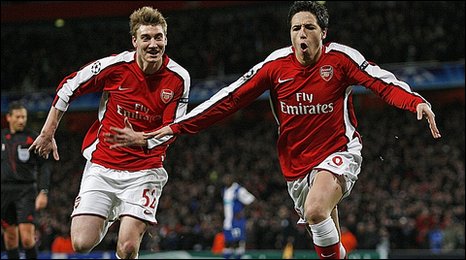 Arsenal are through to the quarter finals of the UEFA Champions League following a convincing display that earned them a 5-0 triumph over FC Porto, winning 6-2 on aggregate.

Arsene Wenger’s side knew that one goal could be enough to advance to the quarter finals, and the Londoners attacked right from kick-off, putting great pressure on their opponents.

The reward came after just ten minutes. A trough ball from Samir Nasri could not be properly cleared by the defense, and the ball ended up in front of Nicklas Bendtner who blasted home for 1-0.

After the opening goal, the match was slightly more balanced with Porto spending more half on the opposing half.

But the Premiership side got their second in the 25th minute as Andrey Arshavin found his way past several defenders and delivered a short pass from the left of the area, with Bendtner waiting to tap in.

Arshavin could have added a third nine minutes later as the Russian had an open goal to score in, but sent the ball over the crossbar instead.

And just when Porto began to create more chances near Arsenal’s goal, it was the home side to make it 3-0 in the 63rd minute. Samir Nasri beat three defenders before his strike from a virtually impossible angle went in from the far post.

Five minutes later, the Gunners even made it 4-0 as Emmanuel Eboue rounded the keeper following a pass from Arshavin.

In the dying minutes, Arsenal netted another after Fucile fouled Eboue in the penalty area and Bendtner completed his hat-trick from the spot.

Man of the Match – Samir Nasri – Amazing performance from the French midfield maestro. Filled the role of Fabregas brilliantly.