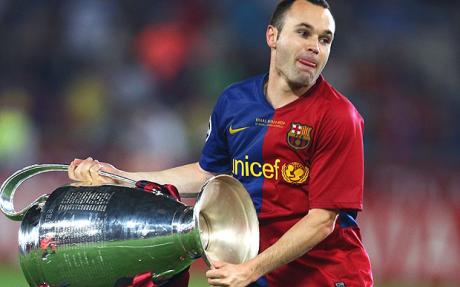 Barcelona’s midfield maestro Andres Iniesta has been ruled out of action for 10 days after sustaining a hamstring injury during the Blaugrana’s 1-0 win over Real Mallorca.

Tests revealed a small hamstring tear, meaning he is set to miss the Arsenal game on Wednesday, a league game against Atletico Madrid but should return for the crucial ‘Classico’ game against arch-rivals Real Madrid on 11 April. However, it may mean that he is doubtful for the second leg against Arsenal too.

Meanwhile, a Spaniard in the Gooner Talk comments section gave his view on Iniesta’s absence:

“Iniesta not playing is good, but he has not been as good since the Champions League final last year, he has been suffering from a lot of injuries lately and he is not in form at all,” ‘Walkers’ said.

“Teams think he is the weak link, and in fact he has been their weak link in a few of their games this season, lots of the goals Barcelona concede are because of his misplaced passes.

Barcelona have not been playing at their best, but remember they have Messi, the best player in the world right now, who can beat anyone by himself. In midfield Keita will probably replace Iniesta, remember he scored a wonder goal against us for Sevilla a couple of years ago. In defence, Milito might replace Pique while Maxwell is a player that lacks energy (do not get me wrong, he is not Silvestre).

Do not underestimate Barcelona, it will be a very difficult match, and we need Fabregas back.”

22-year-old Fabregas should be available despite sustaining a knock on his knee during yesterday’s 1-1 draw with Birmingham at St Andrews.

Stay tuned to Gooner Talk for all the latest build-up to Wednesday’s game!