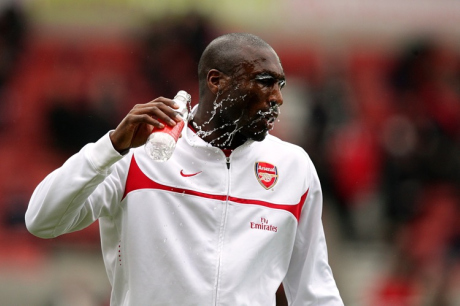 Arsenal arrived in Spain earlier this afternoon ahead of tomorrow’s crunch clash with Barcelona at the Nou Camp.

Defensive worries could hinder the Gunners’ potential progress into the semi-finals, as Alex Song has been ruled out with a knee injury and Sol Campbell is unsurprisingly fatigued after playing on Saturday against Wolves.

“It was a bad surprise this morning because he had a scan yesterday afternoon on his knee and he has an inflamed cartilage,” said Wenger before leaving for Spain. “We have to wait and see how bad it is but he is completely out for the squad for tomorrow’s game.”

Speaking on Campbell, boss Wenger admits that he will have to wait until matchday before making a final decision on the 35-year-old centre back.

“That is a decision I have to make after speaking to him tomorrow,” said the manager. “Today he was still not completely available although he managed to get a warm-up. To go into such a game you must be completely fit or not play at all.”

Want to win a football shirt of your choice? Predict the Barca v Arsenal result by emailing me your score prediction before tomorrow’s game at 19:45 (BST).

We’ll post the confirmed starting line-up when we get it tomorrow evening.

Let us know your team predictions in the comments section!