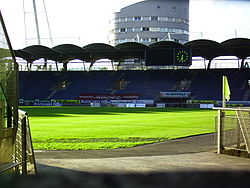 Following on from the confirmation of Arsenal’s pre-season tour to Austria, it has been announced that Sturm Graz will play a friendly against the Gunners.

The Austrian side revealed that Franco Foda’s men will face the north Londoners between the first and second Bundesliga round of the 2010/2011 season on 21st July.

Sturm, who finished last season in fourth and won the ÖFB Cup (Austrian FA Cup), will also play a friendly against Blackburn Rovers on 10 July. Both matches will take place at the UPC Arena in Graz where England beat Japan 2-1 yesterday.

Thanks to ‘Austrian Gooner’ & ‘AA’ for the information.