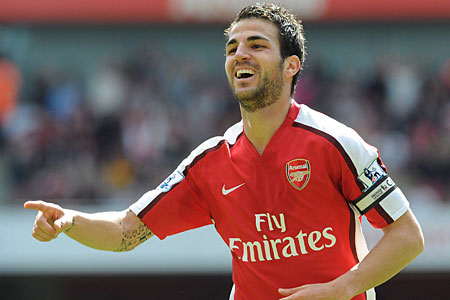 Arsenal have rejected Barcelona’s bid for skipper Cesc Fabregas, meaning that the Spaniard is unlikely to depart the Emirates Stadium this summer.

The Catalan giants confirmed earlier they had submitted a written offer to the Gunners for the Spain midfielder and that the clubs were in “formal” discussions over a possible deal.

But an Arsenal statement read:

“Arsenal captain Cesc Fabregas is under contract with the club until the summer of 2015. He is a highly valued member of the team and part of our future plans.

“We have followed recent speculation linking Cesc with a move away from the club but as there has never been any official approach for him, only two informal exchanges, in which we made it abundantly clear that we have no interest in transferring Cesc, we have refrained from publicly passing comment.

“However, on Tuesday evening we received an offer from Barcelona for Cesc and in response, we immediately and resolutely told them once again that we have no intention of selling our captain.

“To be clear, we will not make any kind of counterproposal or enter into any discussion. Barcelona have publicly stated that they will respect our position and we expect that they will keep their word.”

23-year-old Fabregas has not made an appearance since Arsenal’s 2-2 draw with Barca in the Champions League on March 31 as he fractured his leg in a challenge with Carles Puyol, ruling him out of the return leg that Barca won 4-1.

Leave your opinions on Arsenal’s bold statement and Fabregas’ future in the comments section below.