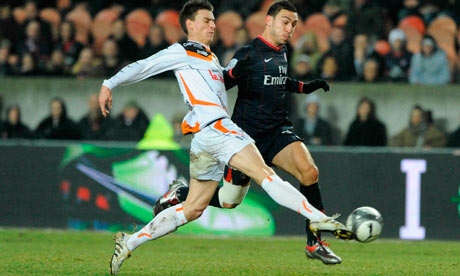 Laurent Koscielny has spoken for the first time to the French media since joining Arsenal and admits “everything has gone quickly for me”.

The 24-year-old, who made made 40 appearances for the Ligue 1 side last season, completed his £10 million + bonuses move from Lorient yesterday.

“Everything has gone quite quickly for me, maybe a bit too quickly. I’ve had some bad times before so I’m enjoying what’s happening to me now.

“The contract is for 4 years. The transfer is worth 12 million euros + bonuses. I knew at the last game of the last season that Arsenal were interested. I wasn’t aware Gilles Grmandi was watching me during all those games.

“Lorient wanted the right price so there’s been long talks with Arsenal.”

Other than the small YouTube compilation below, there’s very little evidence of Koscielny’s defensive ability. The player himself admits that he does need to improve on some aspects of his game.

“My qualities are that I read the game very well. I’ve got a good heading ability, my passing is very good as we use to pass the ball well from the defence at Lorient.

“My weakness is my physical strength, but I’m confident that I’ll work on that at Arsenal.

“I have no guarantee to play, it’s up to me to fight for my place in the team. I know there’ll be 3-4 players fighting for the same position. There’s already 3 centre backs at pre-season training.”

Many thanks to Vince from ASCFR for translating this interview.