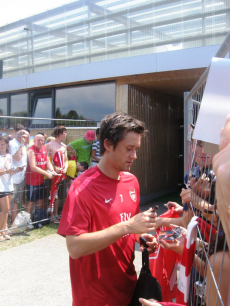 The 29-year-old, who is yet to win a title since arriving in north London from Borussia Dortmund in 2006, has a known admirer in Galatasaray’s head coach Frank Rijkaard who earlier this week was singing the Czech star’s praises.

“Tomas has great footballing intelligence. This would help our strikeforce. Especially Baros [Rosicky’s Czech team-mate] who would benefit from him,” Rijkaard was quoted as saying.

Arsene Wenger is apparently willing to listen to offers for the midfield maestro, who signed a new long-term deal with the Gunners in January, but it seems unlikely that Rosicky will be sold with the new Premier League season so near.

According to sources in Turkey, negotiations will continue on Thursday.