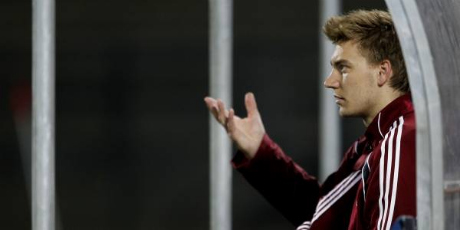 Arsenal’s Nicklas Bendtner has revealed that he’ll wait for his groin injury to “completely clear up” before making a return to action for the Gunners.

The striker had surgery to rectify the problem in November last year, but said the pain had returned during Denmark’s World Cup campaign in South Africa.

Bendtner, 22, said that he is on the road to recovery and pin-pointed mid-October as a potential return date.

“I feel good because it feels better every day. I feel less and less pain to my groin. I can do much more than before as it’s [groin] gradually getting stronger and stronger,” Bendtner told Ekstra Bladet.

“I’m getting treatment and doing core exercises out here [London Colney] every day and I’ve had over one and a half week without noticing any big problems,” he said.

“I hope I get my fitness up during September and then I can start to train with the team.

“From then, I could return in two weeks. It all depends on how the injury feels.”

This news came shortly before Bendtner sacked his “self-publicist” personal physio yesterday evening. Denmark manager Martin Olsen has also been speaking this week on his hopes of the forward featuring in the Dane’s Euro 2012 qualifying campaign.

Thanks to Nicklas Bendtner News for sharing the quotes.