Arsenal have arguably been handed a favourable Champions League group draw, after being paired with Ukrainian side Shakhtar Donetsk, Portugal’s SC Braga, and FK Partizan of Belgrade.

The draw was made earlier this evening and many pundits are already suggesting that the Gunners will breeze through their group. 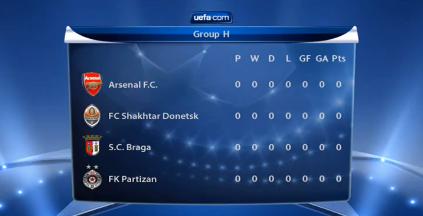 Shakhtar Donetsk boast a Uefa Cup win in 2009, the biggest problem with the Ukrainians from Arsene Wenger’s point of view will be the travelling distance. However, it will see former Arsenal striker Eduardo returning to the Emirates Stadium with his new side.

SC Braga have also done well in Europe’s second competition in recent years, they have not created waves in the Champions League. Nevertheless, the Portuguese side denied Celtic in the qualifiers for the group stage and will be ones to watch. Arsenal’s third and final opponents will be Partizan, who won the Serbian domestic league last season.

In other news, Sebastien Squillaci’s drawn out move to Arsenal has finally been completed but the French centre back won’t be registered in time for Saturday’s match with Blackburn.

“We needed a centre-back of quality and experience if possible, and at the right price – Sebastien was all of that,” Wenger said.

“He is a real defender and is good in the one against one, good in the air, and can score goals on set-pieces as well.

“I believe he will be suited to the English game.

“He will train with us tomorrow morning, but will not be involved on Saturday.”