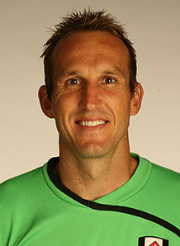 Arsenal have all but finished their business in the transfer window – as far as signings are concerned – after Fulham confirmed to Sky Sports News that goalkeeper Mark Schwarzer is staying at Craven Cottage.

The Gunners have been widely expected to bring in a replacement for first-choice shot-stopper Manuel Almunia, as neither Lukasz Fabianski nor Vito Mannone have been able to step up to snatch the No 1 spot from the former Celta Vigo ‘keeper.

Fulham manager Mark Hughes would have been in serious trouble if he were to allow Schwarzer to make a move without finding a replacement, as the ageing ‘keeper’s understudy, David Stockdale, is sidelined for a few weeks due to ankle ligament damage.

Schwarzer has sat out Fulham’s opening three Premier League matches of the season with an apparent back injury since Australia’s 2-0 loss in Slovenia earlier this month.

Italian side Juventus have announced that they have released French full-back Jonathan Zebina and signed his compatriot Armand Traore on a season-long loan from Arsenal.

Dutch forward Nacer Barazite has agreed a move to Vitesse Arnhem on loan. The winger signs after turning down a move to Heracles Almelo at the last minute.