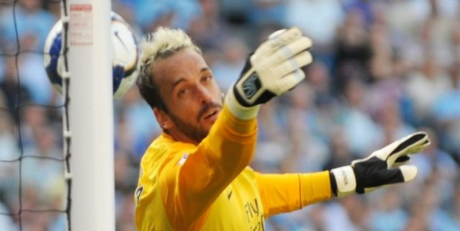 When Arsene Wenger revealed that the goalkeeper who started at Anfield on August 15th would be Arsenal’s no.1 for the 2010/11 campaign, most Gooners began to worry.

The Gunners chief failed to land Fulham’s Mark Schwarzer despite a summer of interest, while Almunia had admitted that the possible imminent arrival of another experienced goalkeeper at Arsenal would be unsettling.

Speaking to reporters earlier today, Wenger heaped the praise on Arsenal’s Spanish ‘keeper, stating that Almunia has  “done extremely well” given the circumstances.

“I believe you have to deal with competition. That’s part of our job. And he (Almunia) has done extremely well.

“I give a lot of credit to Almunia and (Lukasz) Fabianski, during all this period they have coped very well with the pressure and the uncertainty and now they should deal even better with the situation because they know they will play.”

Most Arsenal fans would say it’s a case of ‘one more chance’ for Manuel Almunia this season. The YouTube compilation below superbly depicts that theory.

Do you agree that Almunia should be given one more chance? Leave your thoughts in the comments section.