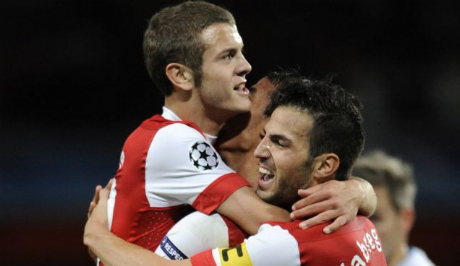 Last night’s 6-0 drubbing of Portuguese side Braga was Arsene’s proteges at their very best. Of course, many pundits have been quick to nullify Arsenal’s performance and classify it as a case of weak opposition, but the adage that there are no weak teams in this stage of the Champions League nevertheless rings true. It would be hard to pick out a single player who had an off-game, and the team as a whole showed great connection and off-the-ball movement. The seasoned approach would be to sound the alarm that we’ve been here before and done that, meaning thrashed a team in the early stages of the competition, but the same seasoned Gooners will know how quickly our luck can change, and that one should enjoy the positive results while they last.

My immediate, blog-worthy thought, if you will, came in the 40th minute after 3 goals had been scored. At that point, I knew there would be no heart-stopping finishes, no nail-biting attempts at willing the ball into the net. Instead, I was excited to have the chance not to be anxious about the result, but instead to have the opportunity to watch a real display of incisive football. Thankfully, the team didn’t fail to entertain us.

All the rags are currently lauding Cesc for his performance, and rightly so. Therefore, I’ll only say well done Captain, it’s great to have you back and in this form. Rather, two things caught my eye. Firstly, Arshavin seemed to have a hunger for the ball back. Whether he simply relishes European nights, or sensed blood, he nevertheless put in a performance that was more effective and committed than what has come to be the norm. He roamed from left to right, always trying to link between Cesc and Chamakh. On his day, he is a very efficient passer and direct dribbler. Last Saturday’s game aside, he also has an unusual calmness in front of goal for a non-striking player. Here’s hoping he’s finally re-discovered his best and will go from strength to strength.

Secondly, I’m a bit surprised at how much Wilshere has featured this season. I originally assumed that he’d get a few games as long as Cesc was rested, and would quickly be replaced by Nasri and Rosicky, but instead I almost expect to see him every time the team sheets are announced. He’s been very considerate with his passing and has always been available. Bloggers and columnists can speculate about Cesc’s possible departure next summer as being a reason for Wilshere’s increased responsibility, but speculation is all it is. I am simply delighted to see him getting important game time with the first team. Also, in case people start doubting his goal-scoring record thus far, I firmly believe playing deep is all part of his education. It wouldn’t be a surprise to see him further up the field, in the Fabregas role, in a few years. Cesc himself wasn’t given an advanced role until the last few recent seasons. Nevertheless, his genius back-heeled assist to Chamakh shows he still knows his way around the penalty box.

Lastly, and I know this is more than 2 points, but I can’t help but mention Chamakh and Vela. I thought the former be a rough-around-the-edges option in place of van Persie if needed. I was wrong. He is much classier and is much calmer in front of goal than I was expecting. He had a very well taken goal last night, and it’s rather comforting to think he’ll only get better as he gets more adjusted. Vela also had a terrific goal-scoring cameo, something that is starting to become a recurring theme. It’s comforting to know that behind van Persie, behind Chamakh, and behind Bendtner (eventually), there is still quality waiting to be used. He didn’t have the best of seasons last term, especially the latter half, but increased playing time seems to be doing a trick. He looks stronger, more confident, and simply happy to be playing. Well done to him.

This weekend’s match-up with Sunderland will be another test for our squad, but if they can carry on their form, 3 points in the bag shouldn’t be too much to ask for. They look hungry, fit, and on the same wavelength. That’s a scary proposition for any team to match.