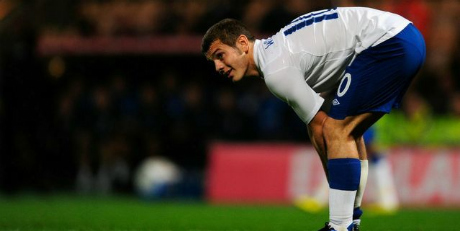 So this is Capello’s new England. The promised mixture of youth and experience, the example of lessons learned from the World Cup, unleashed upon the Continent’s best teams. And then stepped up Montenegro.

Tonight’s 0-0 draw served to illustrate the problems that have been apparent in the English squad for over a decade: lack of end product, no fluidity, and no cohesion between midfield and attack. Yet, it’s not as if Capello was without an option.

Asserting that an 18 year-old could simply walk into a team and fix chronic problems would be a definite stretch, yet Capello’s post-World Cup promise to invigorate the team seemed to be nothing more than emptiness when a player of quality like Jack Wilshere is not used. A player who, from rival players such as Rio Ferdinand and John Terry, to teammates such as Samir Nasri and Tomas Rosicky, has no shortage of plaudits, he would have brought poise and patience to the attack. “The next Gascoigne, Brady, et cetera,” are labels that have all been applied to this prodigiously-talented maestro.

As has been said before, Wilshere is a player which England simply do not produce anymore. Capable of playing very deep centrally to right next to the front striker, he carries the ball with magic and is always capable of the unexpected. Yet, Capello instead decides on the blood and thunder English tactic of hoofing the ball up to a large frontman in the hope capitalising on knockdowns. His decision to grant an international debut to Kevin Davies, he of the Bolton Wanderers school of artistry, was laughable if not pathetic in the extreme.  At some point in the game, he had a decision to spring for either the long ball approach which has done absolutely nothing for England thus far, or go with the promised new direction of relying on a more considerate build-up, and chose the former.

If a 0-0 draw to Montenegro cannot force one to adopt changes, then what will?