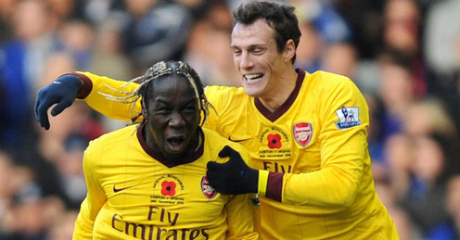 Superb goals in either half from Bacary Sagna and Cesc Fabregas helped Arsenal climb up to second following an impressive 2-1 win over Everton at Goodison Park.

Rememberance Sunday was one to remember for French full-back Sagna, who had only one Gunners goal on his CV going into the game but he doubled his tally after 36 minutes, drilling a powerful shot into the roof of Tim Howard’s net after Samir Nasri’s drive had been parried.

And the Gunners doubled their lead three minutes into the restart when a neat passing move found Fabregas in the area with the Spaniard drilling a low shot into the bottom corner.

Everton finished the stronger and Lukasz Fabianski had to be at his best to deny Louis Saha and Jermaine Beckford. But they did get on the scoresheet with a minute left when the ball was nodded back across goal and Tim Cahill fired in from close range to set up a grandstand finish.

However, Arsenal held firm to collect the win and climb above Manchester United into second place, while the Toffees stay 13th.

Arsenal’s next game is the North London derby against Spurs on Saturday.

“The second goal was an important goal early in the second half. We knew they would push hard at us and at the end they scored and we were a bit nervous.

“It was a good performance. Defensively we looked solid, our only regret is that last minute goal.

“We played very well, we were in control. We knew their game was long ball but we did well against it.”