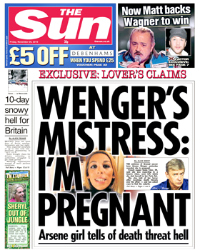 Times journalist Ben Smith revealed the news on Twitter earlier this evening after The Sun continued to link Wenger to French rapper Sonia Tatar with a headline of: “Wenger’s Mistress: I’m Pregnant.”

When quizzed about the matter again a fortnight ago after Arsenal’s 1-0 loss to Newcastle United, Wenger revealed that he has always refused to talk about personal matters and will be doing so again in this instance.

“I arrived 14 years ago and you know what happened and I promised myself I would never comment any more, because for 14 years I have been insulted everywhere in England, and never with any truth,” he said.

“I promised myself I would never speak about my private life any more.”