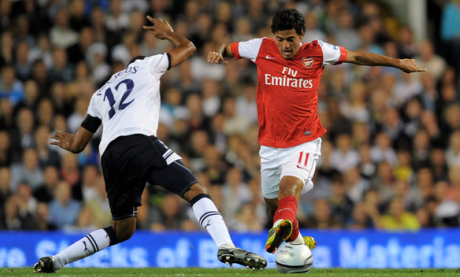 Several high-flying Championship sides have been put on red alert after Mexico starlet Carlos Vela was earmarked for a January loan move away from Arsenal.

Vela, 21, who is expected to start Wednesday’s Carling Cup quarter final against Wigan, has been unable to command a regular place at the Emirates since making his debut in the summer of 2008.

Swansea City chief Brendan Rodgers revealed earlier this week that he had begun fruitful discussions with Arsene Wenger over bringing Vela to Liberty Stadium in the New Year.

This news comes as Vela’s brother, Alejandro, told a Mexican news outlet that a move is even more likely after the return of fellow strikers Nicklas Bendtner and Robin van Persie from injury.

“The truth is that there are several senior European teams in different leagues who are interested and he already possesses a EU passport so don’t be surprised if he leaves Arsenal,” Vela’s older brother claimed.

“But, everything has been kept quiet because this is how things are done in European football but for sure is that Carlos is seeking other options because he wants to play.”

Do you think a loan move to the Championship would be good for Vela? Or should he stay and fight for his place at Arsenal? Leave your views on the frontman in the comments section below.