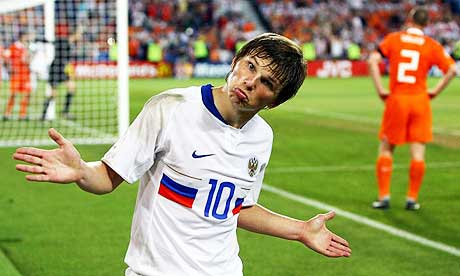 Arshavin, who will be 37 by the time Russia hold the event, was present at FIFA’s HQ in Zurich along with several other Russian dignitaries for the well-awaited announcement.

Despite Arshavin looking extremely dignified after the announcement, Durham used the 29-year-old as a scapegoat for England’s bid failure and encouraged his listeners to “boo” Arshavin when he returns to club duty for Arsenal.

“Arshavin shouldn’t be welcomed back into England after what he did to us,” Durham said on his daily ‘Drive Time’ show.

The oil-rich nation of Qatar were the other selected country to host the 2022 World Cup, making it the smallest nation and first Middle Eastern country to participate in the tournament.