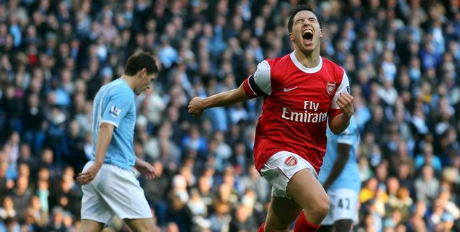 Roberto Mancini’s side, who currently sit in second place, two points ahead of the Gunners, but a win for Arsenal tomorrow would see them go into second ahead of the Citizens with a game in hand.

It is undoubtedly a huge game and looking at the current table it has become equally important as the game against Chelsea last week. After putting a good string of results together over the Christmas period, with huge wins against Chelsea and at Birmingham, Arsenal can now look to push on in the New Year with a succession of games against bottom half sides after tomorrow. Doing the double over City would show huge progress from last season as well as instilling further belief in the side that they are able to win the title.

The corresponding fixture last season was arguably one of the worst seen at the Emirates, ending in a goalless draw. I would expect Mancini to line up a typically Italian style for a similar result this time around. City have little to offer in terms of creativity in midfield, with an abundance of strong holding players that will set up to form a stubborn defence aiming to catch Arsenal on the break. Earlier this season Arsenal pulled of a 3-0 victory at Eastlands but notably this was after City had been reduced to 10 men and they will provide much tougher to break down tomorrow.

It will be interesting to see how Wenger approaches the game with this being our 4th game in 9 days. After the performances of what now appears our first XI against both Chelsea and Birmingham most would like to see the same line-up in such a big game. However, Wenger has used both Djourou and Van Persie with caution after their long injury lay-offs and with both having played twice within a week already, they could be benched. Djourou in particular has been fantastic so far this season and I would personally like to see him play in what will be another physical game, especially after he excelled against Chelsea’s Didier Drogba.

There are no fresh injuries from the weekend with Manuel Almunia (Ankle), Thomas Vermaelen (Achilles) and Emmanuel Frimpong (cruciate knee ligament) all being long-term absentees.

Abou Diaby suffered a calf injury in last week’s fixture away at Wigan and faces a 3 week lay-off. Kieran Gibbs (Ankle) returned to full training today and should be available for the weekend but the game against City comes too early.

For Man City, summer signings Mario Balotelli and David Silva have suffered knee injuries in the last week, ruling them out of tomorrow’s game. Silva particularly will be a huge miss for City after becoming their main playmaker in recent games.

In terms of any impact on City this will probably make little difference, as Tevez would have started as the lone striker regardless of Balotelli’s fitness.

Leave your views and predictions on the game in the comments section below.