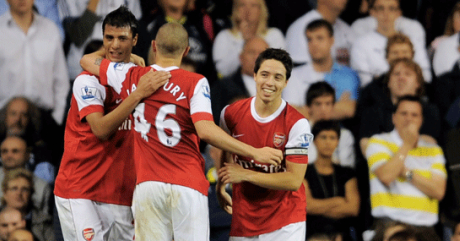 Ipswich v Arsenal. Carling Cup semi final first leg. Arsenal have once again given themselves an opportunity to wipe away the now accentuated saying of ‘five years without a trophy.’ From the first day of the Carling Cup Arsenal’s attitude to the competition has been to win and to win in style. Beating Tottenham 4-1 away in September provided a catalyst for the team, a convincing performance from a side youthful but experienced showed that this team meant business. Recent years has seen the competition be used to nurture through young talent leaving the competition early, whilst Manchester United and Chelsea breeze through each stage to eventually win. However this year is a different story whilst Arsenal have scored 10 and conceded only 1, irrevocably beating every opponent, Chelsea and Manchester United have been dumped out of the competition. Firstly Chelsea lost at home to Newcastle 4-2 in the third round, United were then embarrassed 4-0 at Upton Park by the Hammers. Leaving Arsenal, Ipswich, West Ham and Birmingham City as the semi-finalists playing for an opportunity of glory and success at Wembley.

Before this can be achieved Arsenal have a game, a very important game against Ipswich at Portman Road. Now on paper this should be an Arsenal win, but football is far from the realms of reality. Ipswich will fight with every ounce of sweat they have, they will be closing down, tackling hard they will be well aware of the task in front of them. With Paul Jewell newly appointed I’m sure he’ll want a performance from his team. Now Ipswich have been poor recently with 8 losses in their last 11 games in all competitions, the last loss being the 7-0 flutter from Chelsea. Wenger will no doubt play a ‘strong’ side, but the most important factor tomorrow is that the players go out fully focused and fully determined to win.

Winning the first leg could be one of the most important results for this side, a chance to play in the final against either West Ham or Birmingham is too good an opportunity to waste. Winning the League cup, winning a trophy may kick-start the innate capability of winning trophies that I’m sure we all know this team possesses. Even if they do drive us mad at times with ridiculous defensive lapses or poor finishing, but have patience, as I feel a small hint of glory is edging ever closer. A hint of glory that may develop into a magnitude of success and silverware, but first focus must be on beating Ipswich.