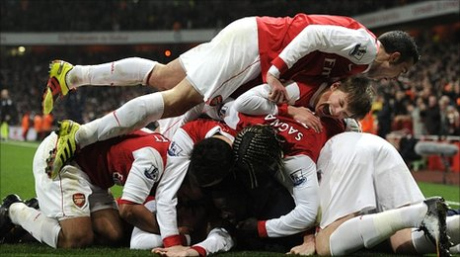 Arsenal midfielder Andrey Arshavin scored his first goal for over a month as Arsenal scored two goals in six minutes against Everton at Emirates Stadium.

The Russian has been criticised for his apparent ‘lack of effort’ in recent games, but struck a brilliant equaliser from Cesc Fabregas’ pass before Laurent Koscielny headed in the vital winner.

Louis Saha had earlier given Everton the lead despite calls for offside from the Arsenal faithful. However, the Gunners emphasised their title credentials by netting two goals in the last twenty minutes.

It was a slow start to the match with both sides nutting each other out in the early stages until Arsenal started to wake up around the 15-minute mark with two half chances to Robin van Persie, from a free-kick, and Laurent Koscielny’s header from the ensuing corner.

The Gunners produced a beautiful move about a minute later, ending with van Persie playing a deft backheel into the path of Cesc Fabregas but he jagged his shot wide from inside the area in what was a huge let off for Everton.

Toffees keeper Tim Howard came up with a good save in the 22nd minute when Theo Walcott received a deflection on the edge of the area before advancing inside but his shot did not have enough angle as Everton’s custodian kept it out with his legs in what was a great chance for the Gunners.

But for all Arsenal’s domination, Everton hit the front in the 25th minute when Seamus Coleman played a through ball towards Louis Saha and although the Frenchman was clearly off-side, Koscielny’s attempted clearance from the pass fell to the striker and he needed no second invitation to hammer home from the top of the area across Wojciech Szczesny for the opener.

Arsenal defender Johan Djourou was only inches off the mark with his 31st minute header before Fabregas sent a low shot goalward and van Persie attempted to lob Howard indicating that the Gunners were back on their game after being rattled with the goal.

Arsenal midfielder Alex Song was replaced by Abou Diaby at half-time after coming into the dressing rooms with a few heavy knocks.

The Gunners were awarded a free-kick on the edge of the box just minutes after the re-start when John Heitinga pulled down countryman van Persie but the left-footed striker’s attempt at hammering the dead ball goalward was way off as the Toffees wall did its job to perfection.

Everton were doing a good job of frustrating the home side and even conjured a few half-chances as the half progressed, forcing Arsene Wenger to make another change for the Gunners, bringing off Tomas Rosicky for Andrei Arshavin in the 61st minute.

Wenger was desperately chasing an equaliser and brought on Nicklas Bendtner for Jack Wilshere with 20 minutes remaining but it was his second substitution that did the job with Arshavin making it 1-1.

Captain Fabregas played a lovely little dink toward the Russian who was able to side-foot it home when he was face-to-face with Howard. The goal was delivered with plenty of calm after the ball looped off the head of Jack Rodwell who was trying to get back to cover.

Bendtner tried his luck with a 73rd minute overhead kick that fell nicely for Howard before van Persie’s free-kick a few minutes later was tipped over the bar by the Toffees custodian.

The corner from Howard’s save then brought about the goal that put the Gunners in front. Van Persie’s swinging ball to the back post was met by an unmarked Koscielny who headed home to make it 2-1 for the home side, stirring the home fans into full song.

Leave your thoughts on the match in the comments section below.