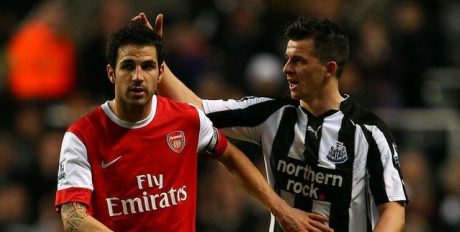 French news wire Foot365 are suggesting that Arsenal’s 4-4 draw with Newcastle is under investigation from Interpol, after ‘suspicious money transfers’ took place during Saturday’s astonishing game.

Arsenal scored four goals in 26 minutes at St James’ Park before a second half comeback from Alan Pardew’s side left many Gooners wondering how losing a four goal lead could be possible.

“The crazy game between Newcastle and Arsenal on Saturday afternoon in the Premier League (4-4) has not finished talking. Today, it would even turn Interpol, to look closely at this meeting that saw the Magpies to join the Gunners, who led 4-0 after 26 minutes though gambling”

“Strong prevailing climate of suspicion around the game, which would have been on the sidelines of sports content with strange movements of money. Tomas Rosicky, the Czech midfielder for Arsenal came late in the game and led to two goals for Newcastle, would be included in the viewfinder of Interpol,” Foot365’s article states.

Arsenal’s press office declined to comment when questioned about the reports. A statement is expected to be released by the club tomorrow morning.