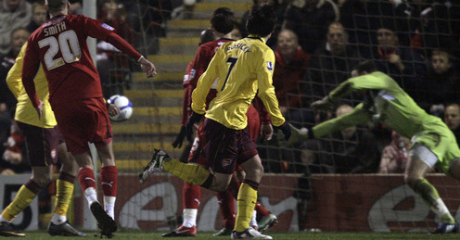 A late defensive slip-up from Arsenal gave Leyton Orient an equaliser and booked the League 2 side a replay at Emirates Stadium in a fortnight’s time.

Arsene Wenger’s side were in total control of the match for the vast majority of the game, dominating the match both before and after midfielder Tomas Rosicky opened the scoring with a neat headed finish. But despite creating several chances, the rustiness of Marouane Chamakh and Nicklas Bendtner was shown after failing to take their opportunities.

Wednesday’s Champions League matchwinner Andrey Arshavin came close on occasions as well, most notably when he grazed the outside of the post with five minutes to go.

Arsene Wenger made the expected sweeping changes from the starting XI against Barcelona, with midfielder Alex Song the only survivor while 18-year-old centre-half Ignasi Miquel made his first-team debut and Manuel Almunia returned in goal. However, captain Cesc Fabregas, Samir Nasri and Jack Wilshere were all on the bench.

Orient, cheered on by a capacity 9,000 crowd, were not overawed and tried to take the game to their illustrious opponents and the visitors could offer only tame efforts from Marouane Chamakh and Andrey Arshavin in their attempts to break the first-half deadlock. At the other end, Charlie Daniels sent a 25-yard effort just over following a corner.

Orient made a change for the second half as injured defender Jason Crowe was replaced by Thomas Carroll.

With an already congested fixture list, which includes Sunday’s Carling Cup final against Birmingham at Wembley, the last thing Wenger will have wanted was a replay, and Arsenal started with more urgency and finally took the lead on 53 minutes.

Bendtner’s persistence in the right side of the penalty area paid off when his cutback was glanced into the far corner by Rosicky – his first goal since January 2010.

On 68 minutes, the Czech midfielder was denied a second goal by a brilliant reaction save at the near post from Jamie Jones, who also blocked the rebound.

Tehoue injected some pace into the Orient attack and the French forward broke quickly down the right, as Alex Revell swept a first-time effort wide from the edge of the Arsenal box. Tehoue broke again and crossed to the centre where Revell fired in his shot – only for the much-maligned Sebastien Squillaci to somehow make a saving block.

Arshavin almost made the tie safe when he dashed clear down the left, but his shot clipped the far post. Orient, though, were not to be denied a famous result as Tehoue drilled in an equaliser with a minute left and Brisbane Road erupted.