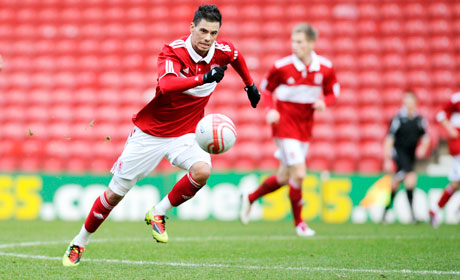 Former Arsenal frontman Jérémie Aliadière has been granted permission to use the club’s training facilities as the free agent continues his search for a new club.

Aliadière, 27, was linked with moves to Newcastle and Blackpool following his release by Middlesbrough last summer, but neither transfer managed to materialise.

Arsenal boss Arsene Wenger was approached by Aliadière’s agent Thomas Brookes last week in a bid to train at the Gunners’ Colney-based centre. Wenger, who has previously let David Beckham and Thierry Henry train with the club for the same reason, told Brookes that Aliadière would be welcome to train with his former side.

Injury-prone Aliadiere made 29 appearances for Arsenal during his time in North London, scoring one Premier League goal.