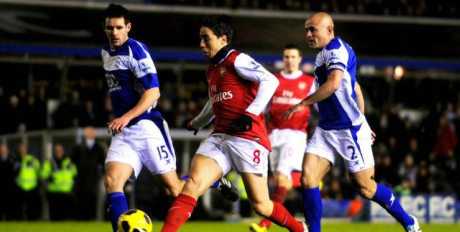 For those of you thought that fantasy football was something that you entered at the start of the season and then go bored of by Christmas – think again. Picklive is the most intense and exciting fantasy football game on web, and takes place in real-time during televised matches

To get started simply visit goonertalk.picklive.com during Sunday’s game and sign-up for a free trial. By picking the three players who you think will contribute the most to the action within a five minute period.

Maybe you are enough of a footballing aficionado to strike out on your own, but if not then here is some friendly insiders advice from Pickive:

Wilshere plays a pivotal role in this Arsenal side, both in breaking up rare opposition attacks and starting Arsenal ones. This is a potent mix in any Picklive game as he will score points consistently regardless of the pattern of the game. Denilson played a similar role against Orient last week, and in it he completed a whopping 111 passes. Expect Wilshere to complete somewhere near the same amount.

The Ashford born defender has been a stalwart for the blues in the Mcleish era, and the combative defender is set for a busy afternoon at Wembley. If Birmingham are to have any chance then he and makeshift defensive partner Martin Jiranek must be solid, making plenty of tackles and interceptions. Johnson however has the added bonus of being a genuine threat from set pieces – making possible an unexpected points windfall.

Lumbering, bumbling, ineffectual; the list of pejorative adjectives could go on concerning this bloke. His contribution to any given game is negligible, and in Picklive there are no points for huffing and puffing to no avail. He doesn’t really pass, he very rarely shoots and he never ever scores. Stay away.