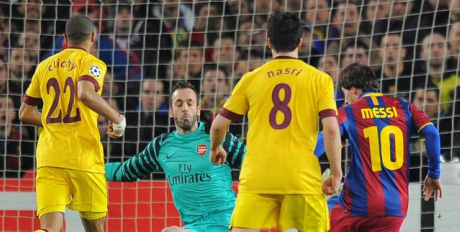 A dominant display by Barcelona saw Arsenal bow out of the Champions League at the Nou Camp, although the Gunners will feel hard done by after Robin van Persie’s sending off early in the second half.

A match between the two sides ought to be a showcase event for two of the greatest footballing teams in the world to go up against each other.

Instead, the referee decided to take centre stage, and gave Barca the helping hand they in all likelihood didn’t need to progress to the quarter finals.

Certainly Barcelona started well of their own merit, as Arsenal appeared overawed by the big occasion. In the first six minutes, Arsenal only touched the ball for 25 seconds.

Losing goalkeeper Wojciech Szczesny to injury after 20 minutes did not help matters, and Arsene Wenger was forced into an early change, bringing on Manuel Almunia.

Arsenal though were rarely in huge danger – despite not being able to keep the ball for more than a few seconds.

Nevertheless, one successful attack from Barcelona would turn the tie on its head, and so it proved.

As the half drew to a close, Cesc Fabregas inexplicably backheeled the ball on the edge of his own area. A schoolboy error, which the intercepting Andres Iniesta duly punished.

He fed Messi, who juggled the ball over Almunia and volleyed home.

1-0 at half time then, but an Arsenal goal would again shift the balance of the tie.

It arrived shortly after the break.

Samir Nasri did well to hold off Javier Mascherano and win his team a corner.

The Frenchman then provided a fine delivery to Sergio Busquets, who headed into the corner of his own net.

Arsenal were suddenly buoyant, and were finally putting some passes together, but the referee soon put an end to their encouraged mood.

Having already punished Arsenal for some niggly fouls with yellow cards in the first half while letting Barca players off the hook – including ignoring Eric Abidal grabbing Robin Van Persie around the throat – he gave Robin Van Persie the softest red card in the history of Football.

Van Persie was given marginally offside, but the Netherlands striker – unable to hear the whistle amid the noise from the 95,000 strong crowd – held the ball for one second and shot wide.

A second yellow for kicking the ball away, according to Massimo Busacca from Switzerland.

After that, it was almost all Barcelona.

Messi scored from a glorious move between Andres Iniesta and David Villa, and the Argentine maestro added a penalty soon afterwards.

In fairness to the referee on that occasion, that decision could hardly be argued with.

Jack Wilshere did put Nicklas Bendtner through straight on, but the big Dane’s touch let him down and the chance was gone.

Would the Catalan side have progressed if it wasn’t for the shocking sending off?

Almost certainly – but we will never find out for sure.