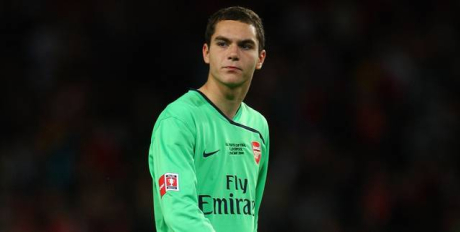 Fourth choice goalkeeper James Shea will be included in Arsenal’s squad against Manchester United this Saturday, after Wojciech Szczesny dislocated his finger during last night’s Champions League defeat at Barcelona.

The 19-year-old has found himself called into the first-team squad this season as cover for injuries to Lukasz Fabianski and Manuel Almunia.

Szczesny’s injury meant that Arsene Wenger was forced to re-call one of his ‘keepers who are currently out on loan – Vito Mannone or Shea – with Wenger cancelling the latter’s loan spell at Southampton two weeks earlier than expected.

Shea was part of the Gunners FA Youth Cup and Premier Academy League double winning-side of 2008/09 and went on to become a regular for the reserves.

Islington-born Shea will be on the substitutes bench for Saturday’s FA Cup clash at Old Trafford, with Spaniard Almunia starting in between the sticks.