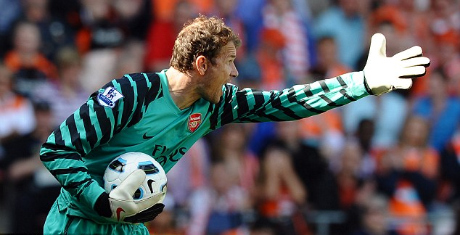 Jens Lehmann has not changed. He can still be the General in the trenches, berating his troops, shouting and bullying his defence to dominate his area. There is something about his aura, you can tell he has tasted success. The man is a lion.

Broad shouldered, very tall, and with good posture; he cuts an imposing figure at the back that balances out the small perception of our defence.  No question he’s got more heart than every keeper, along with Peter Schmeichel, that I’ve ever seen.

The way Robin van Persie gave him the Man of the Match champagne in the post match interview was a fascinating moment that indicated how respected the squad’s grandfather is. It amazes me that some cannot comprehend why fans forgive him quicker than Almunia. The reason is the silverware he has won for us. He’s a part of a great period in our history and nobody can take that from him.

What a great lesson for the players to see a winning animal prepare himself, to see what it takes to reach the top and stay there.

Perhaps Wenger will reinstate him as the Arsenal squad’s fine collector as he once was. The background to the role is one player is responsible for collecting the punishments for lateness and mobile phones ringing. Lehmann, as a previous ‘tax man’ managed to upset many a fragile ego with his abrasive short temper. I’ve written before about how Freddie Ljungberg and he clashed over it.

T’echnically he is superb and he remains a student of the art of goalkeeping. I’d advocate him being the Arsenal Goalkeeping Coach from next season permanently.

While his reactions, anger and distribution might not be as they were in 2004 – it just feels right that Jens is back. If that was his last game I’m glad he got one last game in the sun with 3 points. He’s a legend, and he’s mad.

By the way for all Arsenal chat, transfer news and the odd bit about my career as a Police Officer follow me on Twitter @Detective82. All tweets, feedback, views welcome.