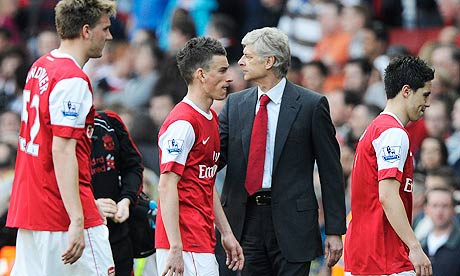 It’s no wonder Arsenal are able to draw so many penalties with their flicky-flicky football and repeated 1-2’s. Sure the style draws fouls, but so often it looks incredibly narrow and like a long shot that it can create a goal. How many seasons now have critics said we are trying to score the perfect goal?

I am not proposing a complete adjustment of the style but unless you take enough shots, then you don’t force errors, create opportunities or force some luck. Cristiano Ronaldo would not have beaten Gomes had he not have shot. The worst thing I’ve heard is the management are considering letting Rosicky leave to be replaced with Hleb for his second spell. I think the Czech should be allowed to move on but signing a player renowned above all others for not shooting makes my eyes water.

The fullbacks, Clichy and Eboue, gave the width for parts of the game but it looked as though the Liverpool defenders could handle head height crosses all day long bar one corner Koscielny nearly scored from. What’s the bottom line? Van Persie is not a last man forward. Numerous interceptions made from his feet because their defenders knew he does not have the pace to run beyond. It reminded me of the FA Cup final against Manchester United, which we ultimately won. With Bergkamp unable to beat Rio Ferdinand for pace, he did what Skrtel did.

I’d like to see Arsenal with Van Persie running on to neat lay offs from a player ahead of him not running behind. He’s a fantastic goalscorer, but not suited to the attrition and warfare of roughing it alongside the rough henchmen of the league. Should someone as brittle be battling with Terry, Vidic, Skrtel or should he be given a free role to link play in behind someone physical enough to bully those players and outpace them? The risk is he would become a luxury player in this role. Maybe he is unable to track back and tackle as effectively as, say, a Fabregas or a Nasri in the role. If that is true then might Van Persie be the wrong player tactically? I do not say this is what I think, I seek to discuss a way of deploying him more efficiently.

Another player I would like to consider is Abou Diaby. He gave Arsenal a power and physicality they miss greatly. His ability to move through tackling midfielders is superb, and yet, I still groan when he is in the side. Why? He doesn’t step up and perform in the massive games. Wilshere, Nasri and Fabregas have all given big performances on big stages at various times (though not lately). The times I get frustrated with Diaby is when Arsenal’s attacking midfielders are straddling the thirty yard line trying to penetrate a stubborn defence. He continually slows the game down, allowing any decent organised outfit to realign to any space made by the player who has passed to him. Watching Barcelona, Manchester United, Real Madrid and Arsenal at their peak you see how vital the speed of tempo is against such a tactic.

What is more, it seems like it has been an age waiting for Diaby to truly arrive at the highest level. It’s been many years that Diaby has flattered to deceive that he would become the all action match winner he could be.

Diaby divides fans into two camps; those that say he is not good enough and those that say he possesses the natural athletic prowess to win games by himself. I am waiting for that player to arrive; and not against Newcastle, West Ham or Everton but against Chelsea, United or Tottenham. For surely that has to be the standard, a group of players individually and collaboratively capable of dominating top matches. Let’s see if he can deliver on Wednesday, and show what he is all about.

Footnote: For all Arsenal chat, transfer news and the odd bit about my career as a Police Officer follow me on Twitter @Detective82.