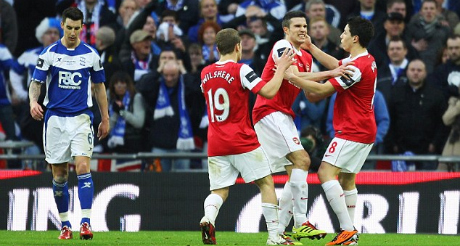 Despite another barrenless campaign for Arsenal in terms of silverware, Arsene Wenger’s side have continued to entertain their domestic and international audiences by scoring some of the most sumptious goals seen this season.

Arsenal’s Dutch wizard produced another spectacular finish in what proved to be a disappointing Carling Cup final defeat at Wembley.

After taking an early lead through Nikola Zigic’s header, Birmingham’s hopes of going in at the break with their noses in front were shattered seven minutes before half-time by van Persie.

It started with a stunning effort from Jack Wilshere that crashed off Foster’s crossbar. When Ferguson’s headed clearance fell to Arshavin he knocked the ball back in for Arsenal’s Dutch skipper to expertly volley into the net.

Unfortunately, it was Birmingham who had the last laugh. A last-gasp defensive mix-up proved devastating as Obafemi Martins tapped into an unguarded net to win the Carling Cup for his side.