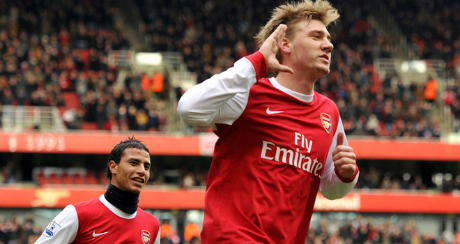 Bundesliga giants Bayern Munich have made tentative enquiries over the potential transfer of Nicklas Bendtner this week, with the Danish frontman earlier admitting that his future lies away from Arsenal.

The 23-year-old’s position at the club has looked increasingly uncertain due to Robin van Persie’s goalscoring spree and the arrival of Moroccan frontman Marouane Chamakh over the summer.

Bendtner’s agent, who told reporters this week that he is is ‘100 per cent open now to a change of clubs’, said yesterday that Copenhagen-born forward would prefer to join a club who will be playing Champions League football next season.

“Our main criteria is playing, playing, playing. But the club [that Bendtner signs for] should also be participating in the Champions League because we believe that Nicklas has the qualities to play in the tournament,” said his father and representative, Thomas Bendtner.

Bayern have made no secret of their admiration for long-term target Bendtner. Franz Beckenbauer stated in November that he ‘has all the qualities’ to play for Die Roten.

A decision on Bendtner’s whereabouts is expected in the coming weeks, with several other European clubs monitoring his situation.