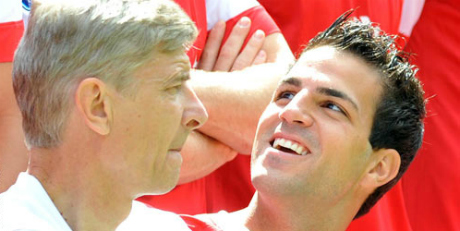 Cesc Fabregas will travel to Spain later today ahead of his move to Barcelona, in a transfer that is expected to total around £34million.

According to several Spanish sources, Fabregas will be presented as a Barca player tomorrow and could even make his debut against Real Madrid in the Spanish Super Cup on Sunday.

In what has been one of the most protracted transfers in Premier League history, 24-year-old Fabregas has developed into one of the best midfielders of his generation under Arsenal boss Arsene Wenger.

His arrival was welcomed and confirmed on Twitter by Barcelona players.

While saying his goodbyes at London Colney earlier this afternoon, Fabregas handed Robin van Persie the captain’s armband as a symbolic gesture. The Spaniard also bought his team-mates Dr Dre headphones as a leaving present several weeks ago.

Everyone at Gooner Talk would like to thank Cesc for his superb service to Arsenal over the years and wish him the best of luck for the future.