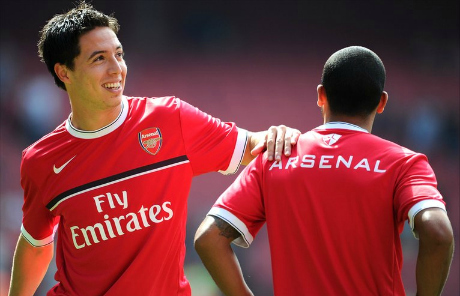 Samir Nasri now looks likely to be staying at Arsenal after talks between the Gunners and Manchester City reportedly broke down.

The 24-year-old was surprisingly handed a start in Arsenal’s 2-0 defeat to Liverpool, despite mass speculation suggesting that the ex-Marseille midfielder was ‘close’ to securing a move to the Etihad Stadium.

However, Arsenal manager Arsene Wenger said on Friday that Nasri is ‘committed’ and has had a ‘terrific attitude in training’, although City boss Roberto Mancini remained hopeful yesterday that a deal could still be concluded.

“I don’t know why [Nasri hasn’t signed yet], but it is probably because he is a good player, or because there is some problem [with negotiations]”, said Mancini.

Reliable French TV channel Canal + revealed that their sources close to Emirates Stadium claimed that the deal had hit a stumbling block and Nasri would be staying put – until at least the end of the season.

When questioned about reports claiming that Nasri’s move has broken down, Wenger told reporters “I don’t know more about that than you”.