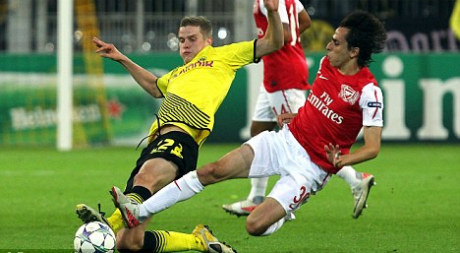 Arsenal’s on-loan midfielder Yossi Benayoun remains ‘hopeful’ that his move from Chelsea to north London will be made permanent at the end of the season, but admits having a ‘good season’ is his priority right now.

The 31-year-old was one of four deadline day arrivals at Emirates Stadium, arriving on a season-long loan from Andre Villas-Boas’ side.

After the summer departures of Cesc Fabregas and Samir Nasri, Israeli international Benayoun says that getting more opportunities in midfield is what he’s currently aiming for.

“Of course, I think any player would like to do it [join Arsenal permanently]”, Benayoun told Arsenal Player.

“The most important thing for me right now is to concentrate on having a good season and any opportunities that I get I’ll try to do my best.

“I’m sure if I do well then we’ll continue the connection together with the club, hopefully, but I’m trying to only concentrate on this season.”

Benayoun, who started in Tuesday’s 1-1 draw against Borussia Dortmund, will be hoping to continue in the Arsenal XI at Blackburn tomorrow afternoon.

However, Arsene Wenger will have to decide whether to play Aaron Ramsey alongside new-signing Arteta, or stick with the midfield combination which worked well in Germany.