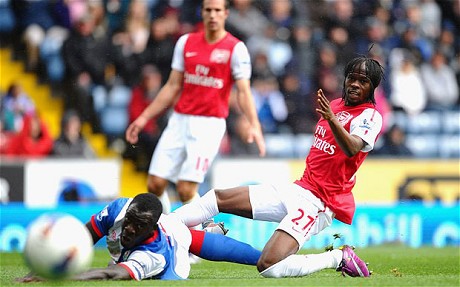 Two own goals and a brace from Yakubu handed Arsenal defeat at Ewood Park on Saturday afternoon, continuing the Gunners unimpressive start to the season.

Arsenal conceded a shocking goal following the break, when Ruben Rochina’s free-kick hit Song on the knee, with the ball rolling into the back of the net.

Rovers manager Steve Kean, who has been criticised by supporters this week, saw his side go 3-2 up when Yakubu scored from close range.

A second own-goal from Arsenal was scored shortly after with Martin Olsson’s shot hitting goalkeeper Wojciech Szczesny and going in off Laurent Koscielny.

Arsenal pulled one back six minutes from the end when substitute Marouane Chamakh headed home from Robin van Persie’s cross.

It wasn’t enough though, as Blackburn held on to record their first win of the season and increase the pressure on Arsene Wenger.