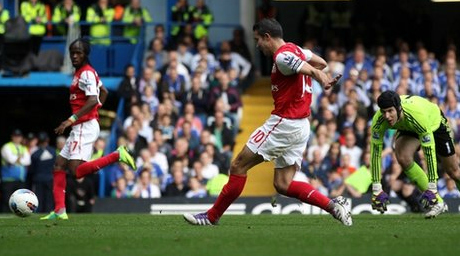 André Villas-Boas’ side opened the scoring through a Lampard header before van Persie levelled for the visitors. Under-fire John Terry restored the home sides advantage just before the break to make it 2-1 to Chelsea at half time.

The Gunners came flying out the blocks in the second half and scored 2 goals in quick succession through Andre Santos and Theo Walcott, both burying their shots past ‘keeper Petr Cech.

Juan Mata then smashed home from 25 yards to draw Chelsea level but a late Van Persie double not only sealed his hat-trick but all three points for Arsenal as they ran out winners in a thrilling London Derby.

Leave your thoughts on the astonishing match in the comments section below.