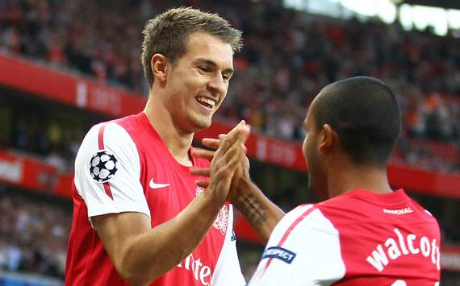 Aaron Ramsey has had five real significant career moments so far. The first was playing for Cardiff against Portsmouth in the Final of the FA Cup as a teenager – and running the game. The second was transferring to Arsenal for £4.8m, bravely choosing to play under Wenger on the 13th June 2008 ahead of moving to Manchester United. I watched an interview of Ramsey on Football Focus that year and he was asked what would decide his mind regarding what team he would transfer to. He replied ‘Well obviously it is going to be my decision.’ It was not rude, but it was firm and I noted an authority and confidence to his voice.

Famously, United had Gary Neville give the Welshman a tour of the club whilst Wenger flew him and his parents – Marlene and Kevin – to Switzerland where he presented him with a detailed analysis of his game and planned development. He arrived for his first day of training in a lime green Ford Fiesta and laughs about it now – probably having replaced it with a top of the range Audi or Mercedes.

Ramsey’s third big moment was his much spoken about and sickening injury at the hands of Ryan Shawcross in the Brittania Stadium. He lost a year from the game, and instead of playing he was confined to visits at home from physiotherapists and subsequently countless lengths swimming. An excellent cross country runner in his youth, the familiar pace and workrate from box to box is finally returning. Ramsey’s fourth big moment in his young career could either be the injury to Jack Wilshere or the transfer to Barcelona of Francesc Fàbregas. Possibly both have fallen to his benefit, as there has been a vacuum at the club for a creative ball carrier to emerge in the midfield. In his favour has been the injury to Diaby, and the loan exit of Denilson. Furthermore, Arteta aside, Ramsey stands in the squad as currently the only fit player capable of scoring goals from centre midfield and making tackles. He has a duality to his game, and the gods have conspired to give him an extended chance.

There have been times where I have watched Ramsey intently and I had felt I was watching an immensely talented footballer, lacking the aggression or drive to succeed at a major European side. I felt I was watching a player that was too nice to dominate matches with the drive of Gerrard, the power of Vieira or the arrogant control of Xavi. He had been to a bar where after his friend defended him from provoking Cardiff fans, his best friend Rhys Hutcherson was slashed across the face. He needed 45 stitches. Something changed and Ramsey found his confidence. Gary Speed saw a determined edge in him to make him the captain of Wales. This was his fifth major career moment. Credit should be given to Speed as he has stuck to his vision of creating a passing team built around Ramsey. Watching the brutish Ashley Williams trying to play a neat 10 yard passes from his own penalty area, whilst being closed down rapidly by Ashley Young against England, I had began to think that Speed was playing tactics he did not have the assets to execute. Thankfully, Wales are settling into the tactics and winning matches.

This new role has lifted Ramsey’s profile. He is being made to face cameramen, journalists and pundits continually and now that the team are doing well he has grown as a man. I noted a real change in his confidence as he stood next to Robin Van Persie for the Sky TV cameras after beating Chelsea. His Cryuff-turn on a sixpence to leave Ashley Cole in the penalty area was just one example that he trusts his technique.

Ramsey has spoken recently to say he wants to score more than ten times this season. His goal against Marseilles and his strike against Manchester United last season make me think I have never seen a better Premier League centre midfield in front of goal, Frank Lampard apart. He brings a British dynamic to his position, where the rigours and hunger do not have to be learned or adapted to. He was already prepared to run, fight and tackle before he made his debut. He often gets compared to Jack Wilshere but in reality the two will have a career that is co-dependent on the other. With a more powerful and positionally disciplined defensive midfielder behind them in the mould of De Jong, such a trio would have the physicality and creativity to control games. Whatever happens, Ramsey will do his part – with confidence.

For all Arsenal chat, transfer news as soon as I get it and general discussion on the club, then follow @Detective82.