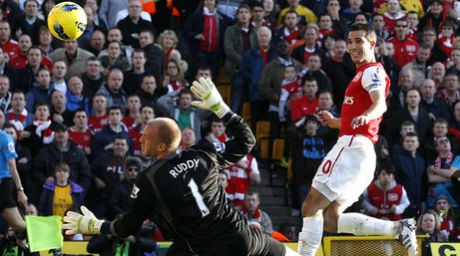 Arsenal continued their recent winning form in the Premier League thanks to Robin van Persie’s two goals against Norwich at Carrow Road.

The Dutchman continued his phenomenal form by netting in each half to move the Gunners level on points with London rivals Tottenham and Chelsea in the Premier League table.

Steve Morison slotted calmly past Wojciech Szczesny to put the home side ahead after Per Mertesacker’s clumsy mistake on the edge of his own area allowed the Welshman in on goal.

Morison’s opener came against the run of play as it was the visitors who had all the early pressure, but van Persie wasted two great chances.

The result brings Arsene Wenger’s side up to sixth in the league table, while it’s also the Gunners’ fifth straight win.