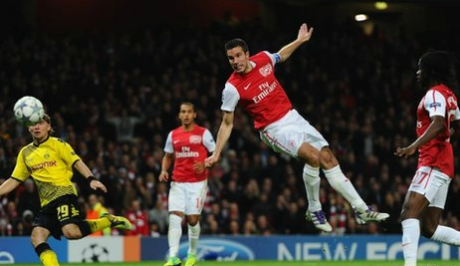 Arsenal made it into the Champions knock-out stage for the 12th consecutive year following Robin van Persie’s two goals against Borussia Dortmund.

The German giants saw key players Sven Bender and Mario Goetze both taken off with injuries early on in an unusually stale first half.

However, Arsene Wenger’s side made the breakthrough soon after the restart when Robin van Persie headed in Alex Song’s cross after a skilful run and cross from the Cameroonian midfielder.

van Persie bagged his second of the match with five minutes to go when he was on hand to knock the ball in at the far post.

Highly-rated Japanese forward Shinji Kagawa pulled one back for the Bundesliga side, but it was too little too late.

The victory, and Marseille’s defeat to Olympiakos, means Wenger’s side have secured top spot in Group F.