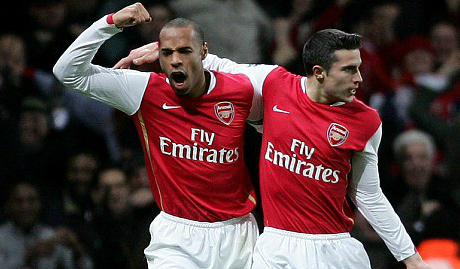 Thierry Henry back at Arsenal? Why not. Inspiring to players of most generations, formerly voted FIFA’s second best player in the world, a goal scorer in world cup quarter finals, winner of big matches against heavy weight clubs at home and away, the scorer of derby goals after a slalom run, or a scorer in a difficult game against stubborn opposition like Leeds or Charlton Athletic and countless others.

Henry is a different beast from the one many remember. He does not have the leg speed or energy to do the wing running he did at Juventus, Monaco or early on at Arsenal whilst Davor Suker was firing in goals from all angles with his lethal left foot. Henry’ game is evolving and slowing down from the player he was at Arsenal in his physical prime. At New York Red Bulls he seems to work with a fiery, quick striker alongside him who distract defenders with their mazy runs and allow him to fire his trademark shots on goal, or pick out a running player. Once upon a time he was the quick, mazy player making space for Bergkamp, Pires, Hleb or Fabregas. The creator he has become, whilst playing in La Liga and then the MLS at a slower pace and in nicer climes will have done his muscles, tendons and joints good. I asked myself whether Henry is too comfortable to come back. Earning a handsome salary in America, getting a statue in England and generally winding down a glorious career. He must ask himself how much he fancies being clattered by Christopher Samba when Arsenal play Blackburn on February 4th. Which young defender will want to put the first punishing tackle in on him to earn a famous French scalp, I wonder. The man that Henry is; proud, humble, a terrible loser – I do not think his hunger will have left him. However, I do not feel he could possibly still have the innate, abstract desire that a man is not truly aware of until he is measured against someone who has more of it than them – usually discovered by the millionaire Champion who has everything against the desperate Challenger in a Boxing ring. The question may be irrelevant for the purposes of a two month loan, some may argue.

To ask a player at 34 whose game is now moving away from having a game founded on their athleticism towards that of their vision – he will need an adjustment period once more to re-acclimatise to it. Players with a game focused on energy just need to be match fit and pass the ball quickly to look as though they are adapted. Touch-vision players want to make key passes, open gate-ways and create. When they are poorly prepared for close marking they tend to suffer far more during the period they are trying to adapt. Of course, Henry still has his remarkable close control on the ball and still has great cardiovascular endurance. Martin Keown said recently that in 5-a side training the other players could not dispossess him.

Henry does not have time frame he might have wanted to realign himself with the current tactics, given the short time span being discussed. These past weeks of training will have assisted him, but the days of Ray Parlour or Steve Bould raking their studs along a new players calf muscle in training to give them a taste for the real thing have sadly gone. The old school Arsenal toughness in training is well and truly replaced with intelligent, technical sessions – but, I still hope Thomas Vermaelen has kicked him enough to get him tuned in to hit the ground running.

Henry could play 5 yards behind a Javier Hernandez type and probably do quite well. However, the current system – for all intents and purposes should be simplified as a 4-3-3 formation – he does not fit that parameter where Henry might prosper most. The only way he could excel in a 4-3-3 is as a substitute; using his mobility, brains, guile, computer-like awareness of zones and spaces to fill gaps or stretch defenders late on in games. That is fair; a loan signing for 2 months at 34 is hardly going to be asked to start every week. However, I am not sure I would start Henry in any games unless he is played in the central position Robin van Persie occupies but 5-10 yards deeper. Henry is no longer concerned with being the fastest, having the best work-rate, or putting in the hard yards to close down a careless Steven Gerrard in the hope of a poor back pass (as he has done).

Henry was never at his best with his back to goal in any case (bar a memorable volley on the twist against Manchester United). Towards the end of his time at Arsenal, the ball seemed to bounce off him and players like Jonathan Woodgate were virtually marking him out of the game. Emmanuel Adebayor, the man who briefly partnered and then replaced him, was and always will be more efficient at back into centre backs like the previously mentioned Samba. Henry could have stayed at Arsenal and continued to compete at a high level had he been moved deeper, behind the big African after his last year at Highbury. His final season at The Emirates was disappointing. He had left on a note where he seemed clearly unsatisfied with the ability of certain players around him, and his performances that season fall short of his standards in years previously. Cruel critics said he had become an unmanageable prima donna.

I want to be able to enjoy Henry, not be comparing how his second spell was so much more disappointing than his first. He may not want to tarnish a superb legacy, and Wenger can help him protect it by signing Lukas Podolski. The best situation would be Henry not starting games but coming on late on to bring his concentration, professionalism, experience by keeping players like Carl Jenkinson, Aaron Ramsey and Szczesny focused on a)keeping the ball whilst winning or b)moving the ball forward at speed to secure a result.

Are you thinking of making some football betting? Not sure which bookmakers to use? Why not come and check out all of the latest odds they have on offer at coral.