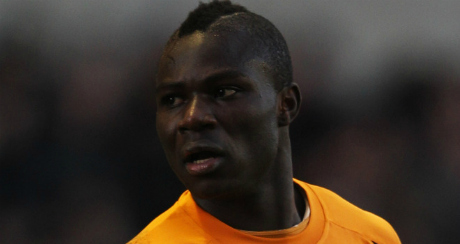 Wolves midfielder Emmanuel Frimpong gave Arsenal a helping hand in their quest for a top four place, after Mick McCarthy’s side drew 1-1 with Tottenham at White Hart Lane.

The 20-year-old defensive midfielder, on a season-long loan at Wolves, produced a typically combative performance against Arsenal’s north London rivals before being taken off on 67 minutes due to being booked earlier in the first half.

Frimpong’s presence certainly wound up the Tottenham faithful who booed him for large parts of the match, although the Ghanaian took it in good humour by sarcastically blowing kisses to them when he was substituted.

Tottenham’s next six Premier League games could prove to be decisive in their apparent title challenge, with Manchester City, Wigan, Liverpool, Newcastle, Arsenal and Manchester United all coming up against them in the next few weeks.

Other Loanee news: Nicklas Bendtner had another accomplished game for Sunderland, but couldn’t salvage a point for Martin O’Neill’s men against Chelsea. The Danish striker missed a late chance to equalise which overshadowed what otherwise was a very good performance.