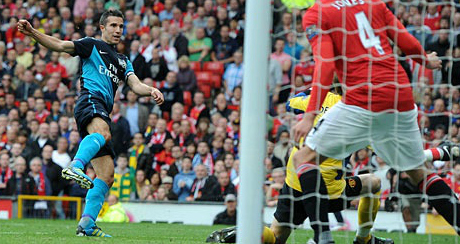 Arsenal are 2.8 shots with bet365 to beat get their revenge on arch rivals Man United when they lock horns at the Emirates on Sunday.

The Gunners were trounced 8-2 at Old Trafford earlier in the season when they allowed Sir Alex’s side 14 shots on goal – the joint-most they have allowed in a Premier League game in the last five years – and will surely have revenge firmly on their minds.

However since then Arsene Wenger has turned things round in no uncertain fashion and this is going to be a really tough close fought affair in which they will surely have revenge firmly on their minds.

They will have to put a disappointing defeat away at Swansea last weekend out of their minds and be at their best to see of the Red Devils, but the stats suggest that they have a good chance of doing so.

Wenger’s men have won three and lost only one of the last five league meetings with United at the Emirates, and in Robin van Persie and Thierry Henry have two players capable of causing their defence plenty of problems.

The former is not surprisingly favourite in the first goalscorer market and at a general price of 5 will no doubt attract plenty of backers.

Henry is an 8 chance with bet365, and his record suggests that is a bit of value if given a start.

The Frenchman scored seven goals in eight home appearances against United, and his last goal at the Emirates in the Premier League was a last-minute winner against Sir Alex’s side.

For those that like to play in that market I would suggest a small split stake between the pair, but a far better bet in my eyes given that this game features so many capable of breaking the deadlock is backing van Persie to score anytime at 2.2 with Betfred and Boylesports.

I fancy Arsenal to edge it 2-1 in what promises to be an enthralling encounter, and that scoreline can be backed at 11 with Betfred.