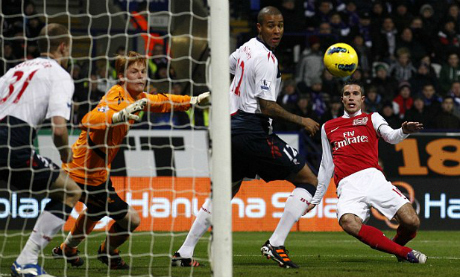 Arsenal failed to find the net against a resilient Bolton side on Wednesday evening in what was a frustrating game for Arsene Wenger’s men.

Top goalscorer Robin van Persie could have given the Gunners an early lead, but his header was cleared off the line by David Wheater.

Alex Oxlade-Chamberlain should have done better soon after, but the winger could only fire wide after being put through by Van Persie.

David N’Gog was Bolton’s most lively player of the first half as he saw one effort saved by Wojciech Szczesny before another ruled out for offside.

The Gunners came to within inches of taking a second-half lead as Van Persie struck the post and then the crossbar.

Thierry Henry was introduced, but he failed to make the breakthrough for Arsene Wenger’s side.

Mark Davies could have won it for the Trotters in the final minutes, but the midfielder put his effort wide after cutting into the area.

Leave your thoughts on the match in the comments section below.