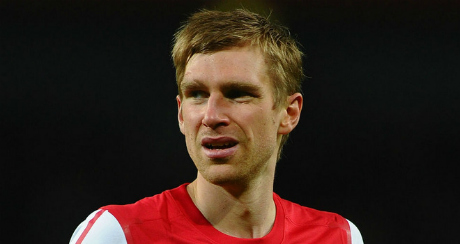 Per Mertesacker won’t be involved in Wednesday’s Champions League tie with AC Milan, and after the German defender posted a photo of his heavily-bruised ankle on his Facebook page earlier it’s certainly not a surprise!

The 28-year-old was was stretchered off after appearing to catch his studs in the turf at the Stadium of Light, in the lead up to Sunderland’s opening goal. Mertesacker looked in considerable pain and will now have scans to determine the full extent of the problem.

Gunners boss Arsene Wenger confirmed that the former Werder Bremen centre back is definitely out of Wednesday’s game, although Johan Djourou should be back in the squad for the match at the San Siro.

“We were unfortunate, because Mertesacker told me he got like a shot in his ankle and couldn’t move at all anymore”, Wenger said after the 2-1 win over Sunderland.

“We are a bit worried about his ankle, I must say, because he goes home on crutches. He has done some ligament damage. How deep the damage is, we have to check tomorrow, but for sure, he is out for Wednesday.”

Stat ahead of Wednesday’s Champions League clash: In eight two-legged ties and one final (excluding the Super Cup), no Italian side have ever eliminated Arsenal in a knockout competition.