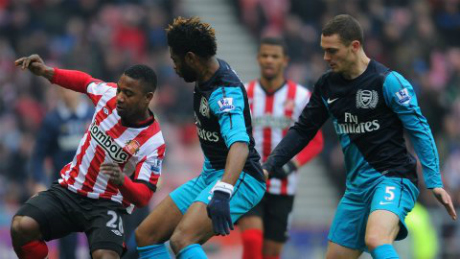 What a difference a week makes!

This time last week Arsenal put up a good performance beat Sunderland 2-1 at the Stadium of Light, yet in midweek they were very poor when getting hammered 4-0 at AC Milan in the Champions League.

Now they must bounce back, and they are 2.6 shots with Boylesports to do so as they meet they Black Cats for the second time in 7 days in their fifth round FA Cup clash on Wearside.

Arsene Wenger is sure to have read the riot act to his players after the AC Milan game, and if they can rep-group and put in a similar performance that they did 7 days ago when winning here 2-1 there is every chance that they can knock-out the Black Cats.

The stats reveal that there is nothing to choose between the two sides as far as there meetings in this competition is concerned.

Arsenal’s first FA Cup tie under Wenger was against Sunderland, with the Gunners wining 2-0 at Roker Park in a 3rd Round replay in 1997.

Overall the two clubs have been drawn together six times, with each side progressing on three occasions.

So it will probably all come down to which team is up for it most on the day, and if Wenger can work his magic then Arsenal certainly have players capable of putting in a winning performance.

A lot will obviously rest once again on the shoulders of Robin van Persie, who has been central to their success this season.

He has been scoring virtually every time he takes to the pitch in the past year, and has netted seven times in his last nine FA Cup appearances.

That makes the Dutchman once again look decent value at 4.75 with bet365 to net the opener.