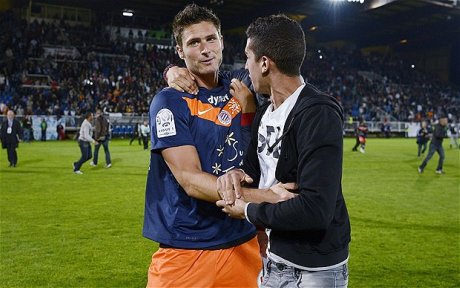 Arsenal have entered into negotiations with Montpellier for highly-rated striker Olivier Giroud, according to the French club’s manager.

The 25-year-old’s form in front of goal last season for the French champions is believed to have attracted the attention of a number of clubs, including Bayern Munich and Inter Milan.

However, Arsenal boss Arsene Wenger appears to have won the race to acquire the services of the 6ft 3in Frenchman, according to Montpellier manager Rene Girard.

“Arsenal are very interested and Giroud wants to play in England, if Arsene [Wenger] agrees with the president [Louis Nicollin], he will sign for them”, Girard told French radio station RMC.

Giroud has confirmed that he will assess his options after the Euro 2012 tournament in Poland and Ukraine, where he is expected to prioritise Arsenal’s offer with best friend Laurent Koscielny already at the club.

Arsene Wenger’s strong-looking team have already been busy this summer in securing the signing of Germany forward Lukas Podolski, while a deal for Yann M’Vila is said to be in the offing, although it is far from completed.