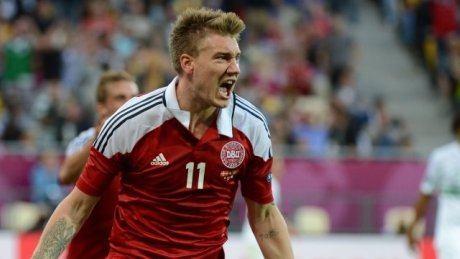 The 24-year-old striker has made no secret of his desire to leave Emirates Stadium this summer, prompting Arsene Wenger to confirm the Dane will leave if he ‘finds the right club’.

Bendtner’s agent admitted this week that interest in the striker, who spent last season on loan at Sunderland, is ‘overwhelming’ and ‘global’.

“The interest is overwhelming, just as it should be after the way Nicklas performed at Euro 2012,” said Jesper Lynghus in Danish newspaper bold.dk.

“We are getting closer day by day. We are not commenting on individual deals at the moment, but it is fair to say the interest in Nicklas is global.”

Gunners’ officials are hoping to sell Bendtner for a figure in the region of £7-8million, while other fringe players including Carlos Vela, Denilson and Andrey Arshavin are expected to be sold before Arsenal’s pre-season campaign begins on July 9.

Danish frontman Bendtner joined the Gunners as a 16-year-old in 2004 and, despite a handful of impressive displays, has ultimately never done enough to carve out a permanent place in the Arsenal starting XI.