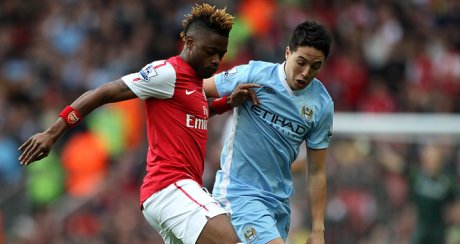 Arsenal are hoping to avoid another ‘Robin van Persie’ contract situation by tying Alex Song down to a new long-term deal at the club.

The Cameroon international’s existing deal is worth around £55,000 a week and expires in the summer of 2014, although Gunners boss Arsene Wenger has refused to set a deadline on Song’s future – meaning talks could drag on into the new year.

But Arsenal are determined to keep hold of Song and have now opened early negotiations with the deep lying playmaker. Song, 24, has been offered a pay rise and a new contract until 2017.

“We know our fans want a trophy and we are very close to winning something. My message to our fans is: Believe in us. This team will get better”, Song stated in the summer of 2010.

“I am at the right club. Forget Barcelona, Arsenal is the best club. Arsenal have given me everything and I love this place. If I had to leave I would break down and cry. It’s still my dream to win the league here.”

Kieran Gibbs, Laurent Koscielny, Bacary Sagna all see their contracts expire in 2014 along with Song, with Arsenal confident that the latter will put pen to paper on a new deal at Emirates Stadium.

Would you like to get some fantastic Betting Tips before you make your bets on the Gunners ahead of the 2012-2013 season? Make sure you come and check out Betfair today!