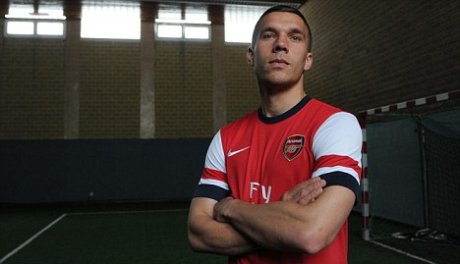 Arsene Wenger has given his biggest hint yet that Robin van Persie will leave Arsenal, admitting that summer signing Lukas Podolski is likely to play a central role upfront this season.

Podolski, 26, was signed by the Gunners before Euro 2012 for £11.7million, bringing with him a wealth of experience and drawing plaudits from van Persie himself who declared his admiration for an ‘amazing player’.

The German international’s squad number is ‘yet to be confirmed’ by the club, adding to rumours that van Persie’s departure would leave the door open for the former Bayern Munich forward to take the Dutchman’s coveted no.10 shirt.

“I think Podolski will play more central for us”, Wenger told Tsinghua University students in China on Thursday.

“Giroud [Arsenal’s other frontman summer signing] is a different target man who would be more the player in a 4-4-2, he knocks the ball down, protects the ball well, makes play for his partners, and is a very intelligent player who has great physique, as well as being very strong in the air.”

Wantaway striker van Persie has already trained with new-boys Podolski and Giroud at the Gunners’ London Colney training ground, following the club’s decision to leave the 28-year-old out of their pre-season tour of Asia.

Arsenal play Manchester City in Beijing later today as part of their pre-season preparations and will be hoping to get one over the reigning Barclays Premier League champions in true partycasino.com style.