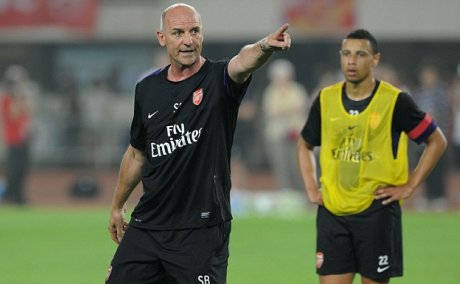 Steve Bould’s promotion to assistant manager has already made a massive impact at Arsenal, according to several first team stars.

Bould was been promoted from youth team head coach to Wenger’s number two following Pat Rice’s retirement at the end of last season.

The 49-year-old was put in charge of the Gunners youth team in 2001, leading them to the 2009 Youth Cup and consecutive FA Academy Premier League titles.

His ‘no-nonsense’ coaching style has drawn plaudits from supporters and players alike, with goalkeeper Wojciech Szczesny revealing that he is exactly the kind of character Arsenal need ahead of an exciting Premier League campaign.

“Steve likes to shout at players and keep them on their toes which some of us need.

“Pat [Rice] was like our father and he didn’t want to scream at us. Steve is a little bit different.”

“As a central defender, it’s absolutely fantastic to have someone like Steve Bould around.”

“Already, in training, you can see the influence he’s going to have.

“He’s going to have a massive input into the defensive unit. He could be as big a signing as any player could be, having Steve in the first team squad.”

“He has adapted very quickly and very well to the job.

“His personality is good and he is accepted by the players”.